When to do the first Inclusion Web

People should be supported to complete the Inclusion Web as soon as possible. A relationship of trust usually helps make the conversation honest, but delaying too long before completing an Inclusion Web for the first time may mean that progress made prior to this point will not be shown.

Generate names of people and places

Use questions to prompt the person to describe people and places in their lives – focusing on where they meet and interact with other people. Each name that comes up should be written on or just beside the appropriate segment of the Inclusion Web. The supporter should then ask the person, ‘anyone/anywhere else?’ and repeat that question if necessary in order to obtain the full list of names of people and places.

​Work round the chart 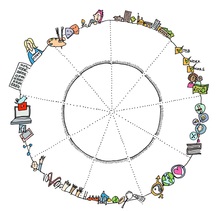 The person completing the Inclusion Web should take the lead in selecting the sequence in which the various segments are discussed. Some people will want to begin by focusing on an area where they have some activity, rather than rigidly working round clockwise.

In order to obtain a picture of current lifestyle, all the questions relate to the fortnight or month before the interview. Activities that actually took place in that time period, or that would normally have taken place should be counted. For example, if the person normally volunteers once a fortnight, but missed the last session, then this would be included as if it had happened. People and places that are important to the person but have not appeared in their recent diary of activities should be explored, but will not appear on the count of people and places.

It follows from the previous paragraph that very infrequent contacts will probably not appear on the count of people and places, even if they are very important to the person. For example, an annual visit to see mother at Christmas may be a major highlight. These details could be recorded in the space around the Inclusion Web, but the count of people and places records only the frequent contacts and the statistics only recognise any change between the first and second Webs.

Space within the circle is used for recording the present situation of the person. Lots of detail and context can be added in the space around the circle, e.g. ‘I used to work in an office’; ‘I would be interested in teaching’, ‘I loved art at school’ (thus, past and future). The free space around the circle is the place to describe the equally important assessment function of the Inclusion Web: the conversation about and reflection on a person’s experiences, dreams and aspirations. We have produced the Inclusion Web in an A3 format in the Inclusion Web leaflet, however this may still not be big enough to capture all of the important information – additional sheets of paper can be attached to the leaflet with more information if necessary.

Set a date for doing the Inclusion Web again

After first Inclusion Web has been completed, it is time to set a date to do the exercise again, usually three to six months after the first one has been done. The actual time interval will vary according to the expected pace of change, but some degree of consistency where possible between people will make the results more comparable.